IN THE BEGINNING
THE STEPHEN PIKUS STORY

Our products are handmade and labour intensive, giving us the ability to make as positive a social impact, as we do on the environment.

Everything we do needs to have a relevant impact, both socially and environmentally and at the same time, should be able to stand shoulder to shoulder with some of the top brands in the world.

These pieces of functional art are made from recycled glass and are the backbone of our giving back. We buy glass from many trolley-pushing recyclers and process it so that it takes on the smooth finish of glass one would find on a beach.

I was born and raised in Johannesburg—my love for working with my hands came from my plumber / builder father. I often accompanied him to site and earned pocket money painting on weekends. Jump two decades, I volun-teered for an NGO in Tzaneen, Limpopo for a total of 16 years and together with a hand full of artist and a carpenter, we started a type of inte-rior decorating business with me in the painting team. The profit we made from our work sup-ported a number of the initiatives that the NGO ran, for example an orphanage and some work with people recovering from substance abuse. I started to recycle and up-cycle items that were found at the rubbish dumps and scrap yards in the area as a hobby. I fell in love with making things from other people trash and became most passionate about creating light fixtures. 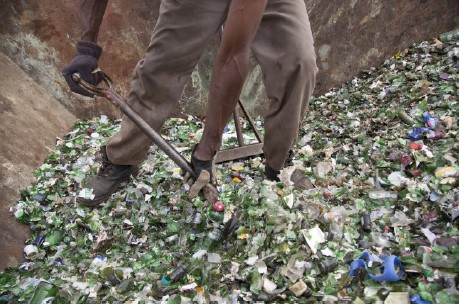 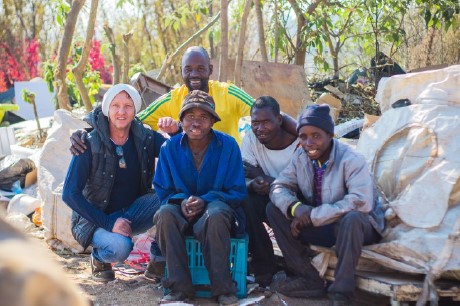 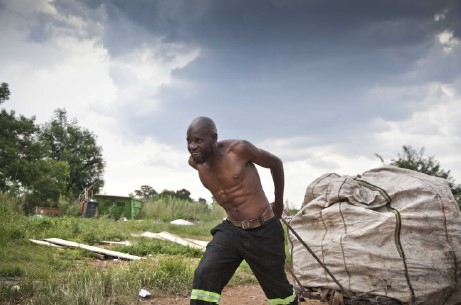 I started to craft some for my own home and at the end of 2014 I entered a competition that ESKOM ran every 2 years called ‘The Energy Efficient Lighting Design Competition’. A design that I made from used air filters from diesel trucks miraculously won! ( https://northeasterntribune.co.za/143412/local-wins-eskom-design-competition/ ) At this time my wife and I were feeling it was time to move back to Joburg as we had two small kids by now and we needed to start establishing a life for them. We arrived back in Joburg in early 2015 and I could not find a job. I went to various paint shops to paint sample walls for free as I had learned many specialist paint techniques over the years. Later that same year I entered a competition that Black and Decker were running as I was desperately in need of tools although had no money to buy them as we arrived back in Joburg with absolutely no money or credit histo-ry and had been living on a stipend of R2 000 per month for many years. Fortunately, my wife found a job so she could buy a small vehicle on finance through the company—I then entered some of the lights I had made as a hobby into the competition (I made these in a friend’s garage) and in June 2015 I ended up winning all the tools I could need! (http://www.easydiy.co.za/index.php/in-search-of-south-africa-s-ultimate-diy-guru). The competition was run in conjunction with a decor show called Grand Designs Live and I was given a stand at the exhibition for a very reduced rate. I was very insecure and almost embarrassed to display my lights for the first time yet that was the start of our lighting business. The response from people was very encouraging and we were given the first few orders from that show – this was where my hobby started to show potential of becoming a business. I began looking for used air filters and glass bottles at the rubbish dumps and scrap yards, and then did all of the preparation myself. When the first few orders came in, one of the recyclers joined me permanently and I taught him what I knew at the time…then the next one joined, and the next, and the next thing we looked up and here we are today.

WHAT OUR CLIENTS SAY

Some feedback on our most recent work.

You guys are legendary! You guys are great and having amazing support & service. I couldn’t ask for any better. Thank you!

A well designed, easy to use one with a good support. I highly recommend you consider Heli if you are going to make your website professional looking.

Great theme with a lots of customization possible. Customer service is fast, nice, and very competent. Thank you for this great product.